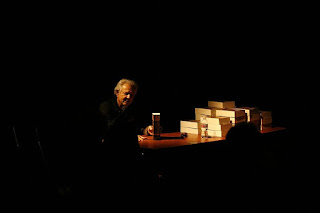 Allen Ruppersberg followed in the tradition of the travelling bard by performing and selling poems at reduced prices during the time of the fair. Setting up an ad-hoc stall inside the Koenig bookstore, Ruppersberg brought some of the anti-commercialism of the beat era to the slick marketplace of the art fair.

Allen Ruppersberg (b.1944) is an American artist based in New York and Santa Monica.