Skip to main content
January 05, 2010
I am going through poetry books and attacking the "don't ever sell any
poetry books" mantra I adopted after swapping the language number of
the paris review and the first edition hardcover of flow chart when I
was in grad school. To get rid of some books this year.

I found a
book (I think her third poetry book) by Katie Louchheim in my possession. It is on
Vintage because her second husband was the Random House publisher.

Her first husband was a big cheese, starting in Washington under FDR, where he created a little org called the SEC. Katie was Vice Chair of the DNC, Deputy Assistant Secretary for Public Affairs in the State Department, United States Ambassador to the United Nations Economic, Scientific and Cultural Organization. 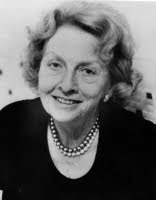 Sen. Eugene J. McCarthy, wearing HIS poet hat, wrote a
poem to her that's printed on the back cover as a blurb. His poetry is easier to find.

In her book about the new deal, claims Dean Acheson was a poem as well.